Actyx gathers anonymous aggregate user behavior analytics when you use the Node Manager. Analytics allow us to prioritize fixes and features based on how, where, and when people use Actyx. You can opt out of sending analytics data in the preferences section of the Node Manager. Find out more in this section below. 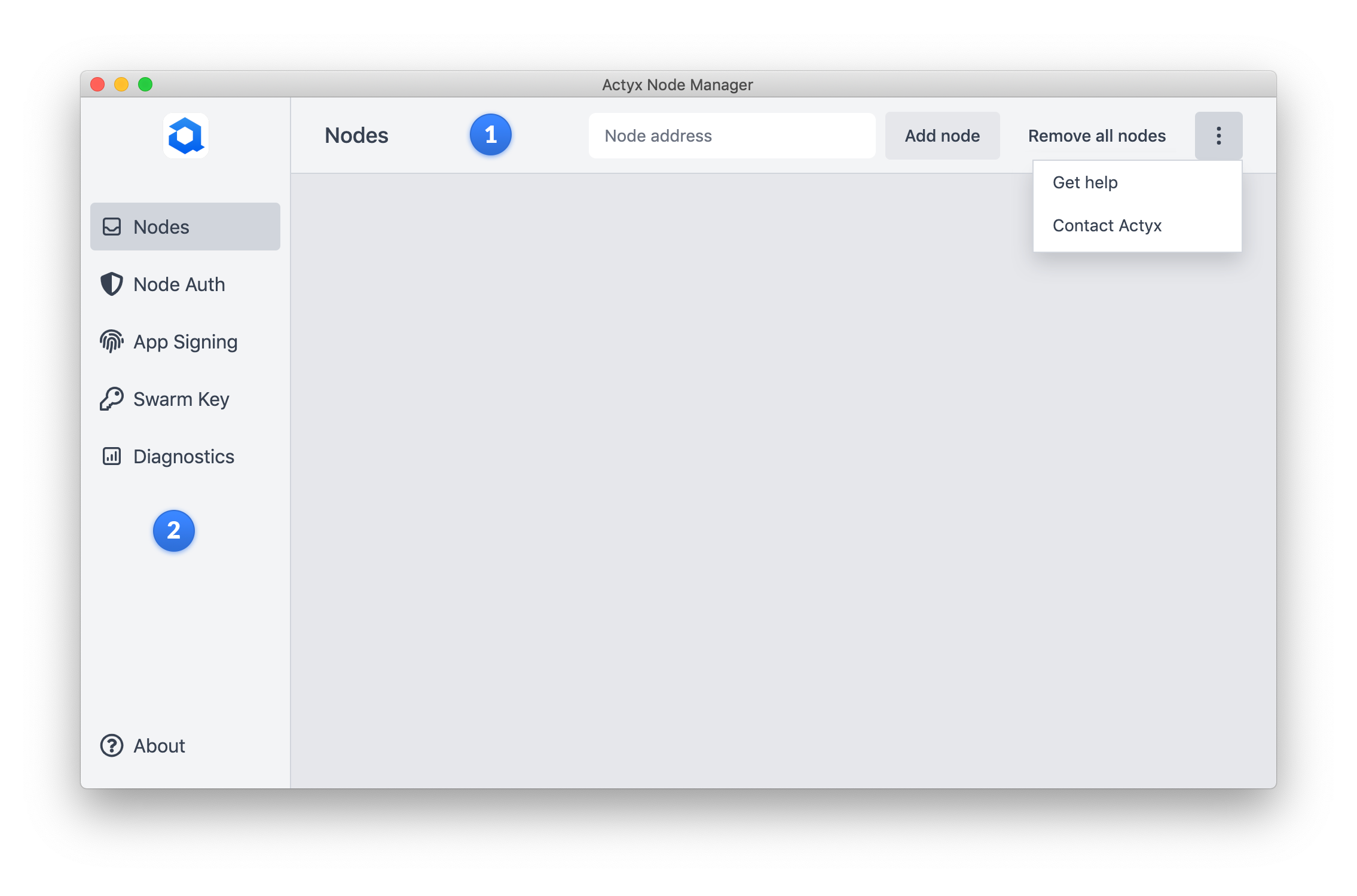 The main navigation elements of the application are the top bar including the node search and the left panel leading to the different features of the Actyx Node Manager.

The search bar lets you connect to your nodes by entering the IP address of the node you want to connect to into the search field. Right next to the search bar, the selected nodes can be removed with the click of a button. The dot menu to the very right provides contact and help links.

The left panel is the main entry point to the node overview and all features of the Node Manager. The node overview displays all nodes that you are currently connected to and your favored nodes. The features are: 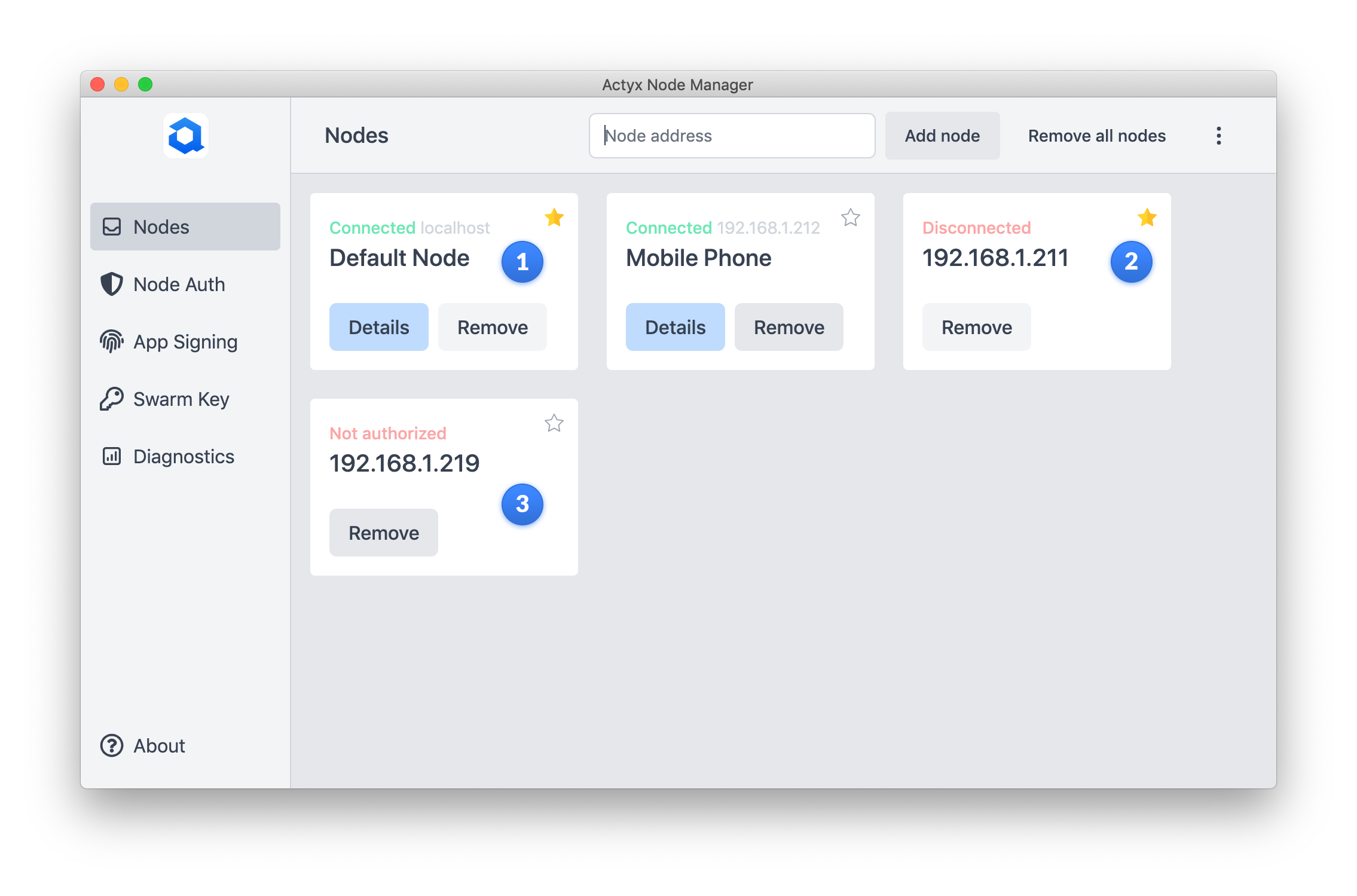 The Node Overview screen displays all nodes that were added since opening the app. You can click on the star in the upper right corner of each card to store that node’s address and open it again when the Node Manager is restarted.

Upon adding a note via the search bar, it appears in Node Overview. For each node, the display name, the connection status, as well as the IP address is displayed. Additionally, you can jump into the node details, remove the node or mark the node as a favorite using the start in the top right corner.

Once a node is marked as a favorite, it can no longer be removed and will be saved across sessions. This means that all favorite nodes are still there when you reopen the app, even if there is no connection. Once the node establishes a connection, it will be reflected in the UI.

If a node is displayed as Not authorized, it means that the Node Manager could establish a connection to that node but your public user key is not listed under that node's authorizedUsers. 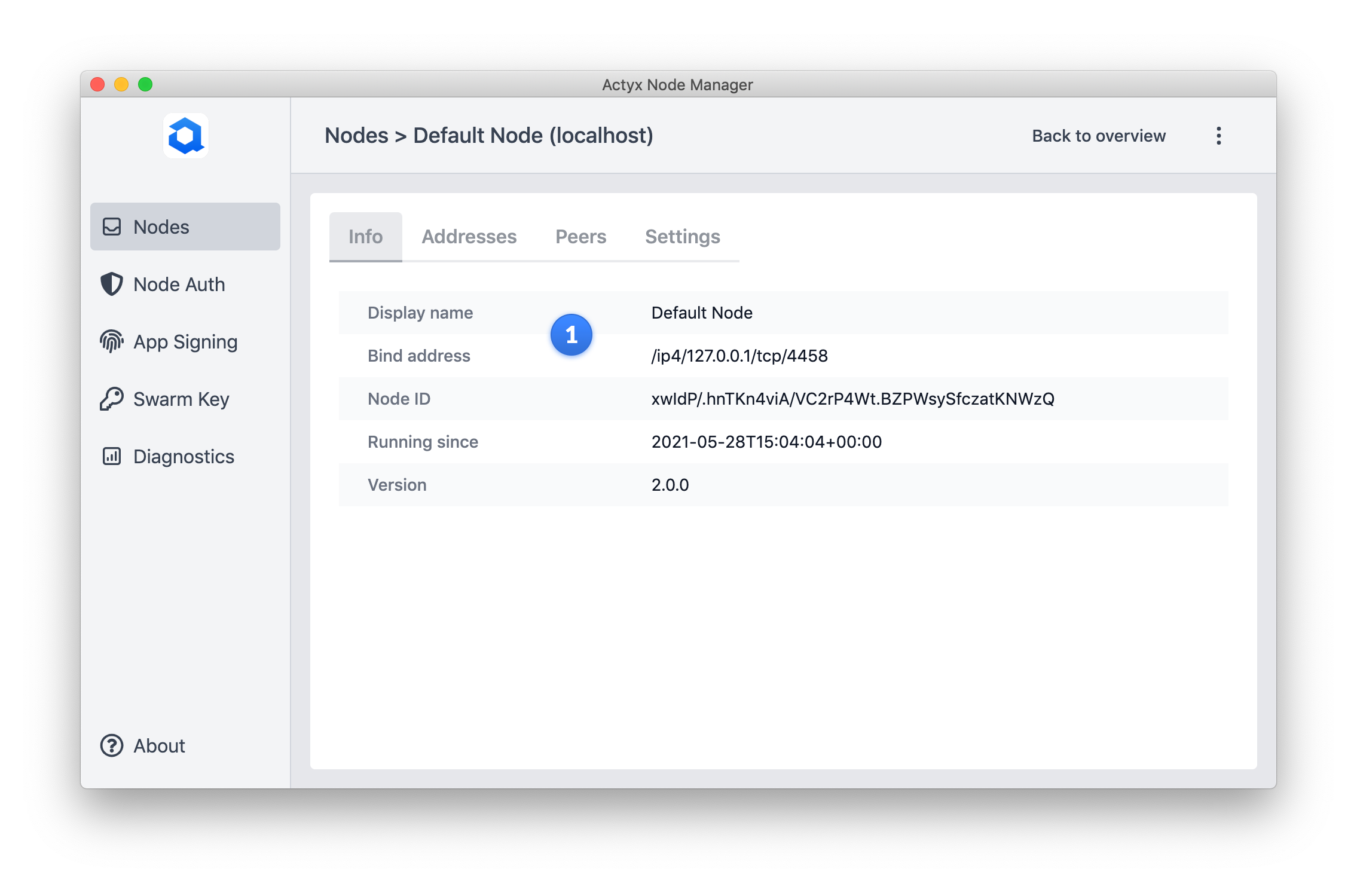 The Info view displays meta info on the selected node. It contains: 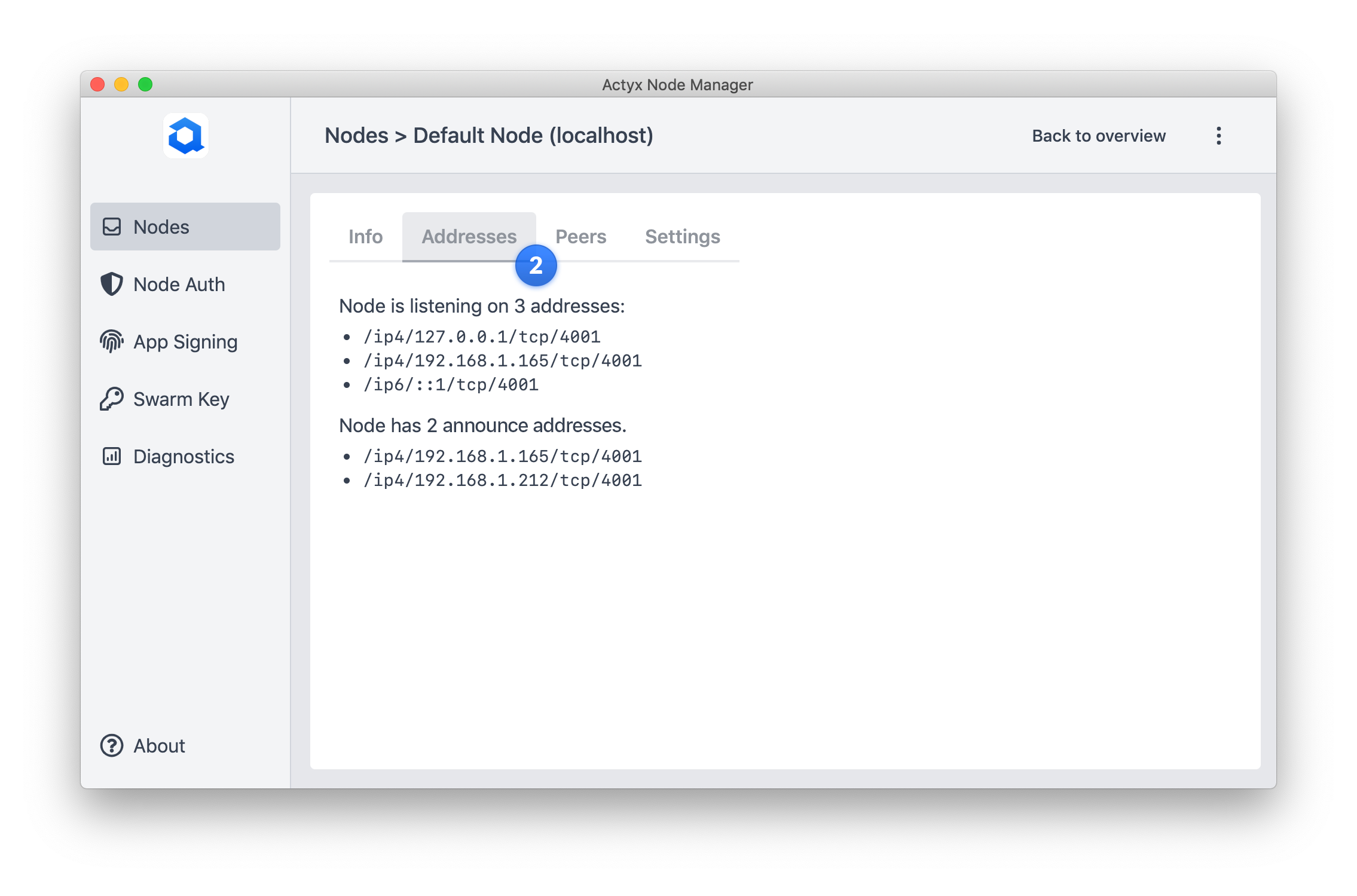 The Addresses view provides network details of the node.

The announce addresses display the addresses defined in the node settings. For more information on announceAddresses, please refer to our how-to guide. 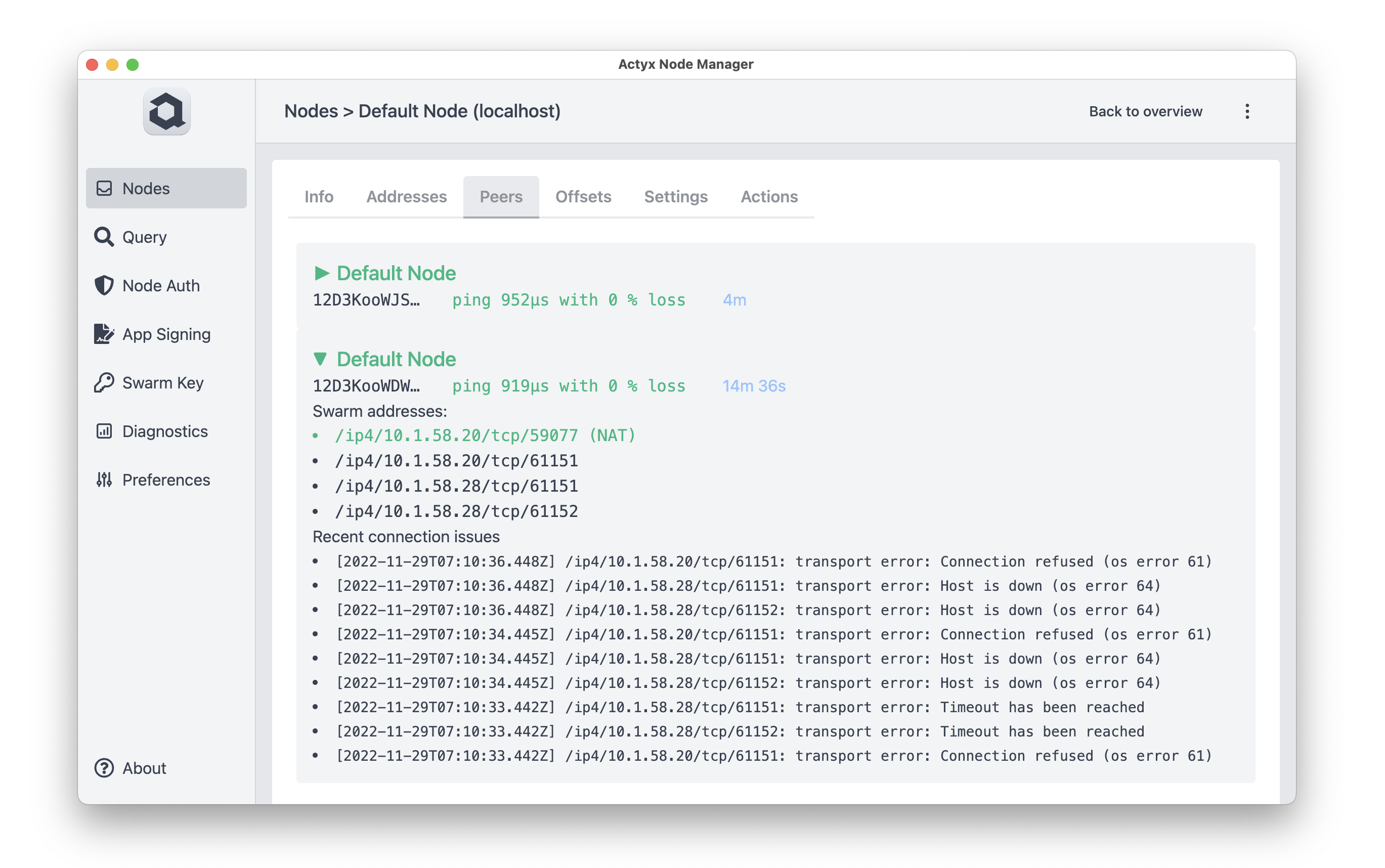 The Peers view displays all peers of the selected node together with its ping stats and connection time. Actyx aims at keeping stable connections between peers, so seeing short times here may be indicative of network issues. The ping stats tell you more about the round-trip latency of the network connection between the nodes as well as the failure rate.

You can click on each one to expand more details, as is shown for the lower one. Besides all known (and previously known) addresses for this node you can also inspect the most recent connection issues. While “connection refused” usually means that Actyx is not running, “timeout” errors often indicate a firewall problem.

The Offsets tab shows all event streams known by the node as well as the current offsets: 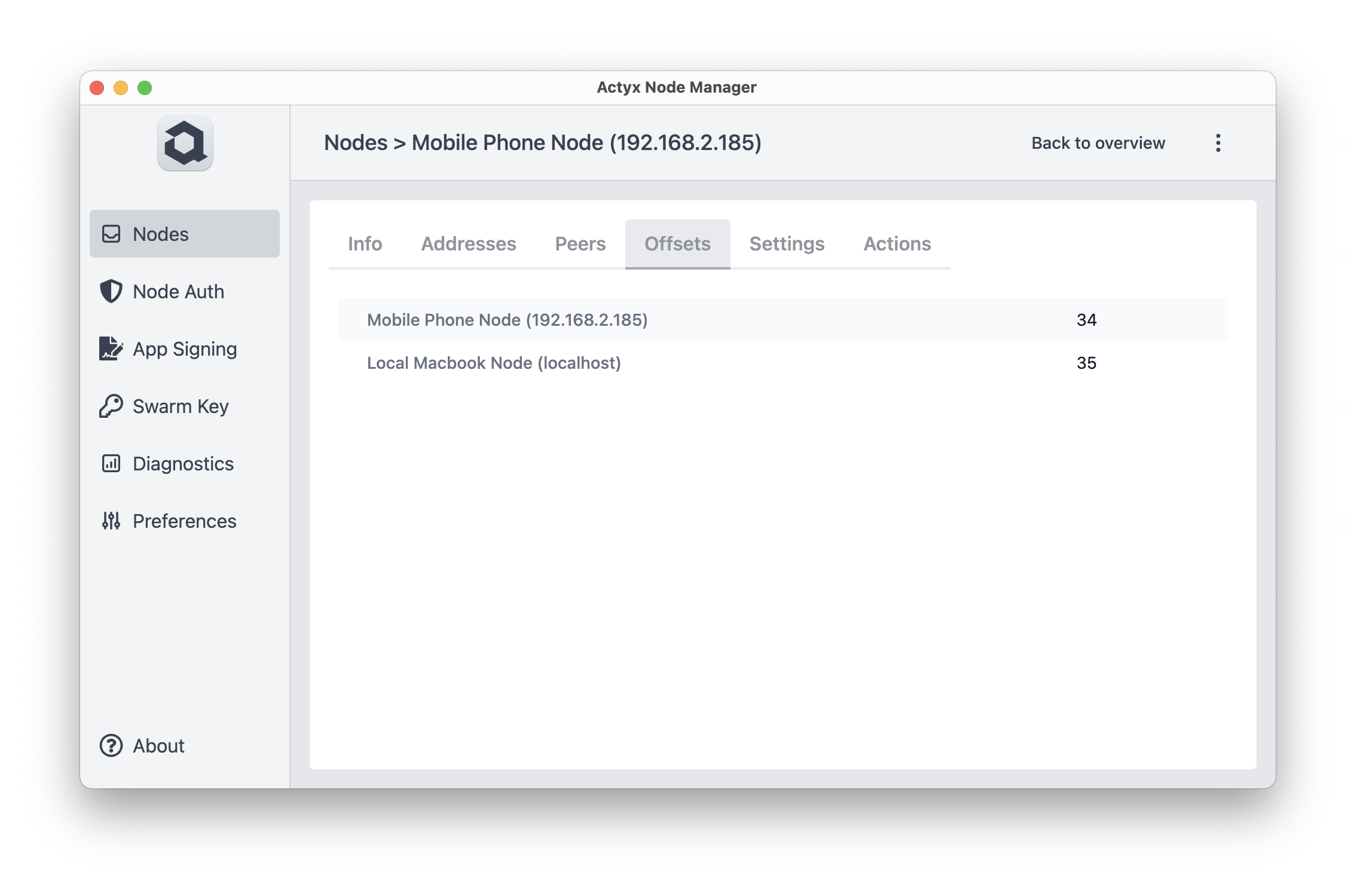 Additionally, the number of events the node knows it must get, but hasn't gotten yet is also shown where applicable. 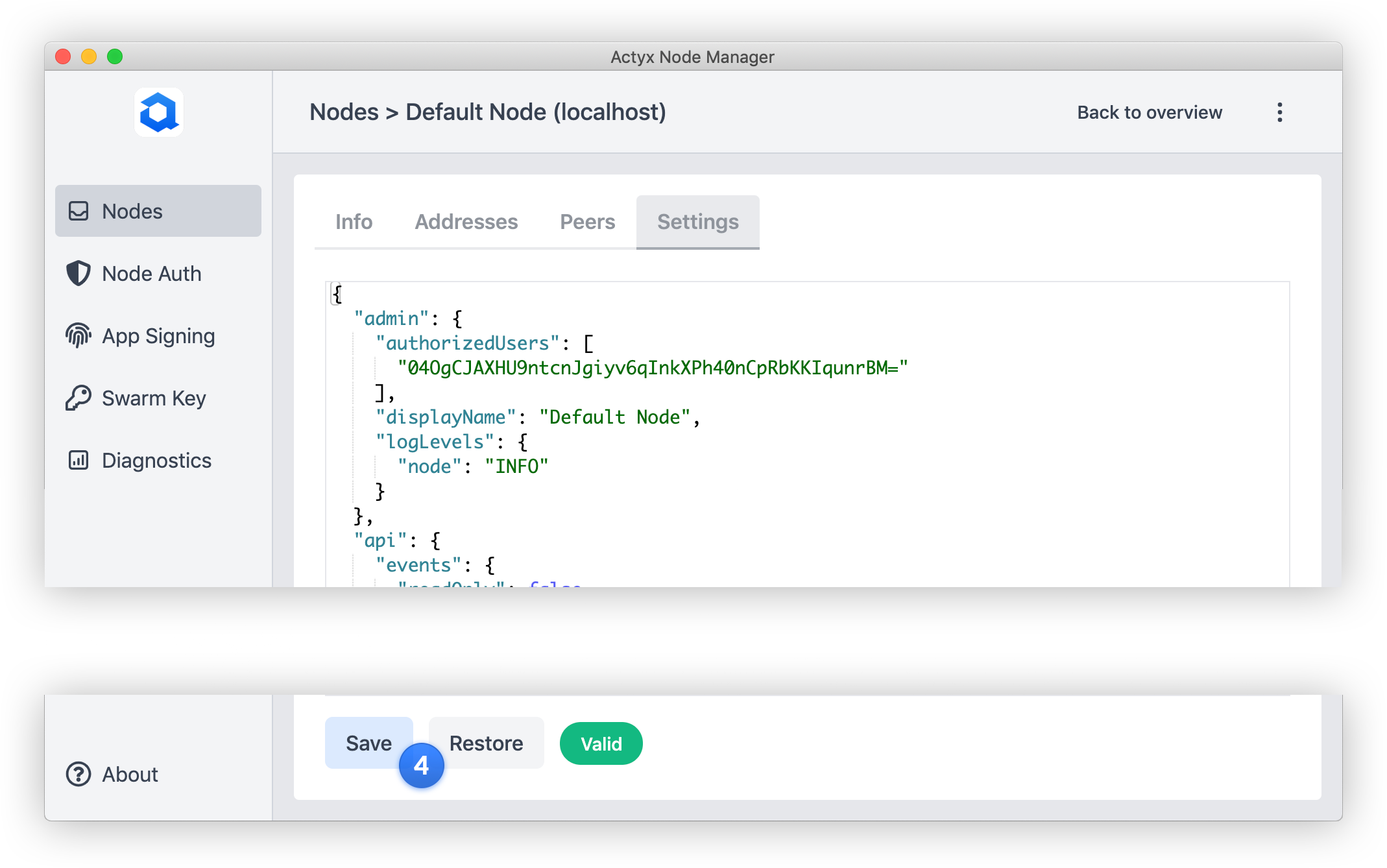 The Settings view provides an editor where you can manage the node settings. The settings are constantly validated against the node settings schema. If you want to revert the changes you made since they were last saved, simply press the Restore button.

Actyx Node Manager lets you create user keys so that you can establish an authorized connection to the node. For more information on user keys, please refer to our how-to guide. 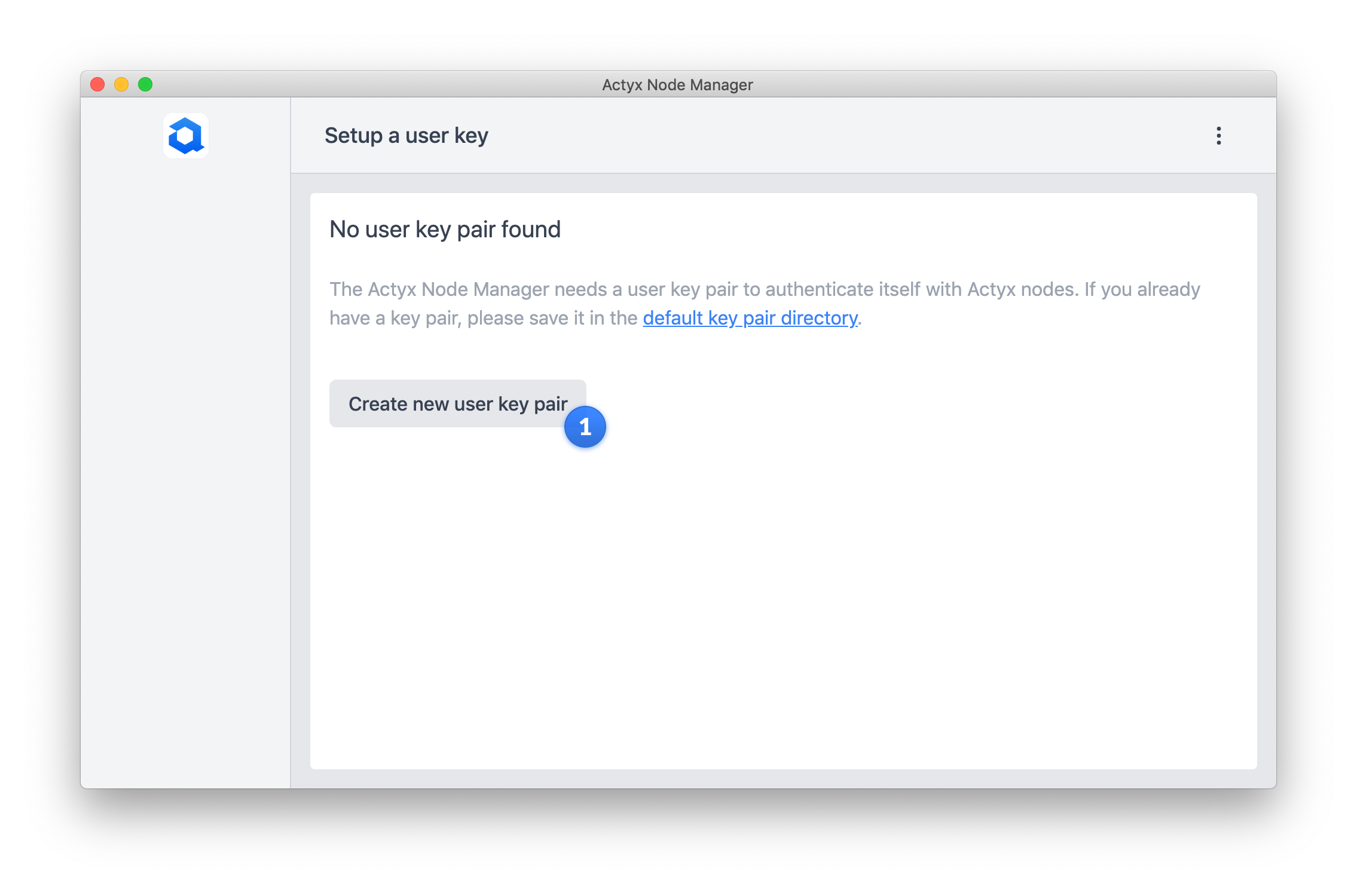 If you open the Node Manager and it cannot find user keys in the default location, it will ask you to create a pair of user keys. 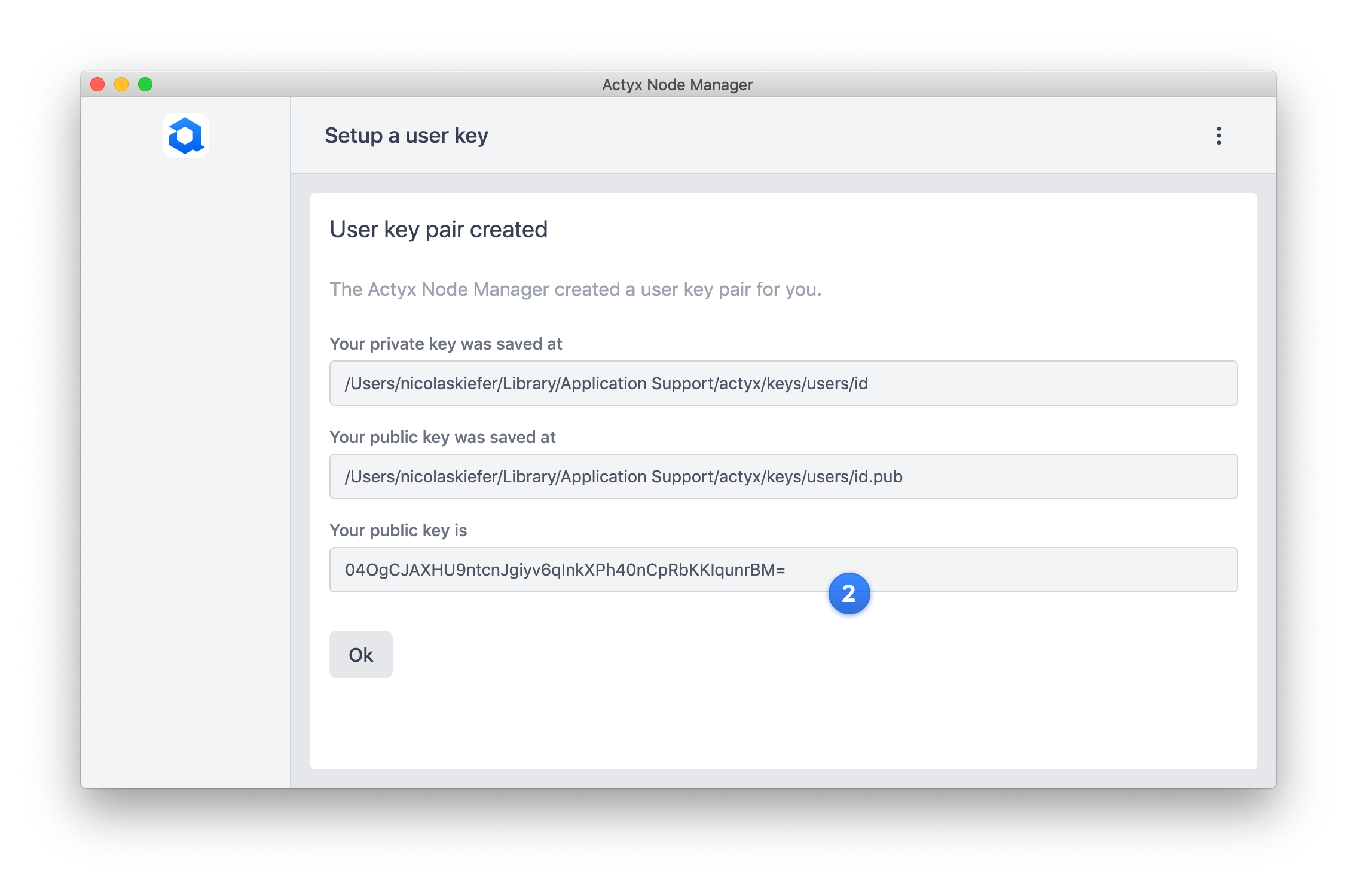 Once you have created the keys, Node Manager displays the location on your device where it saved the user keys as well as your public key. 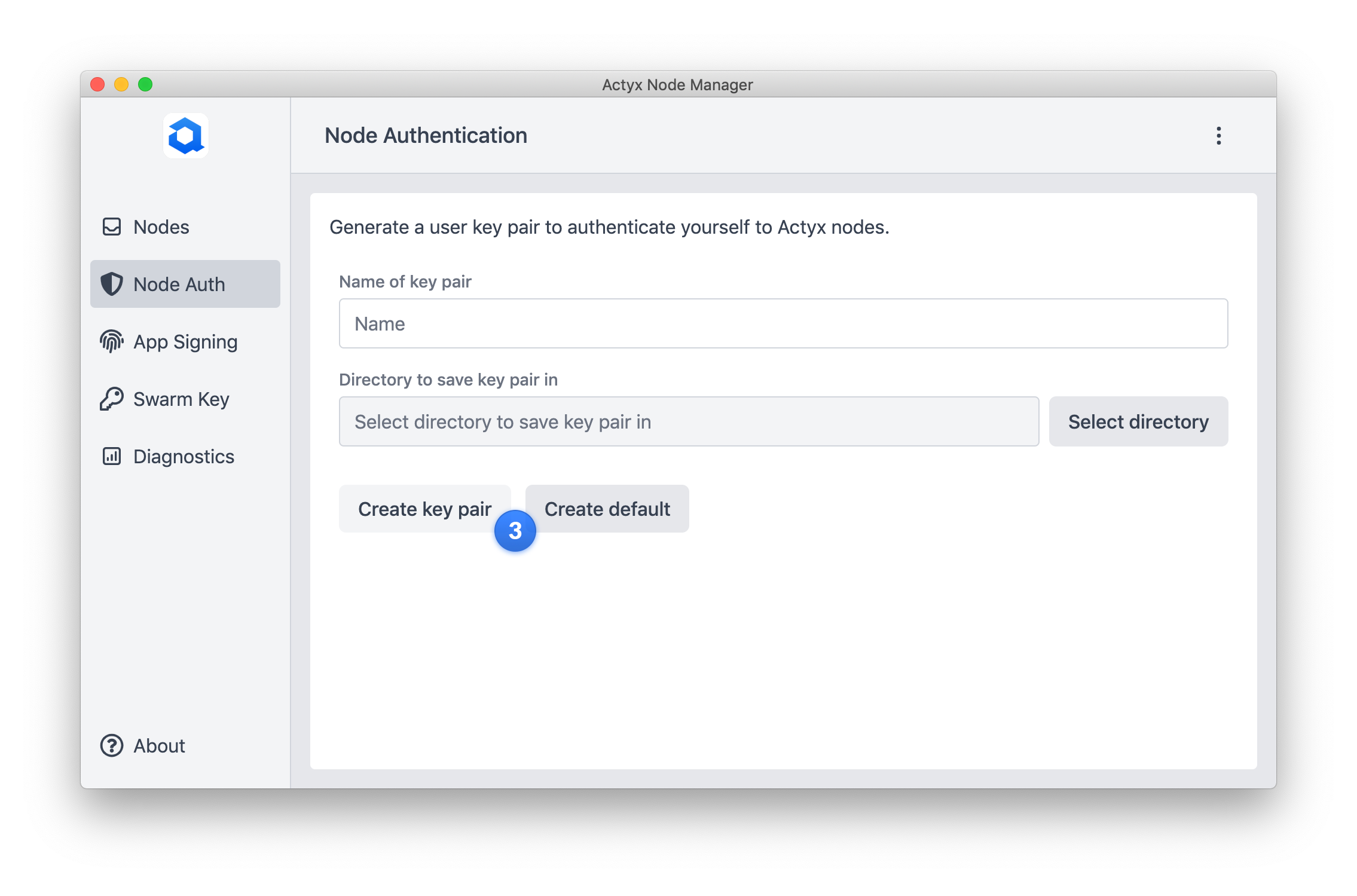 You can at any time create additional user keys by defining a name and a location where to save the key pair. On button click, another key pair is generated.

Actyx Node Manager lets you sign app manifests so that you can authenticate your app with the node and access its APIs. For more information on app signing, please refer to our how-to guide. 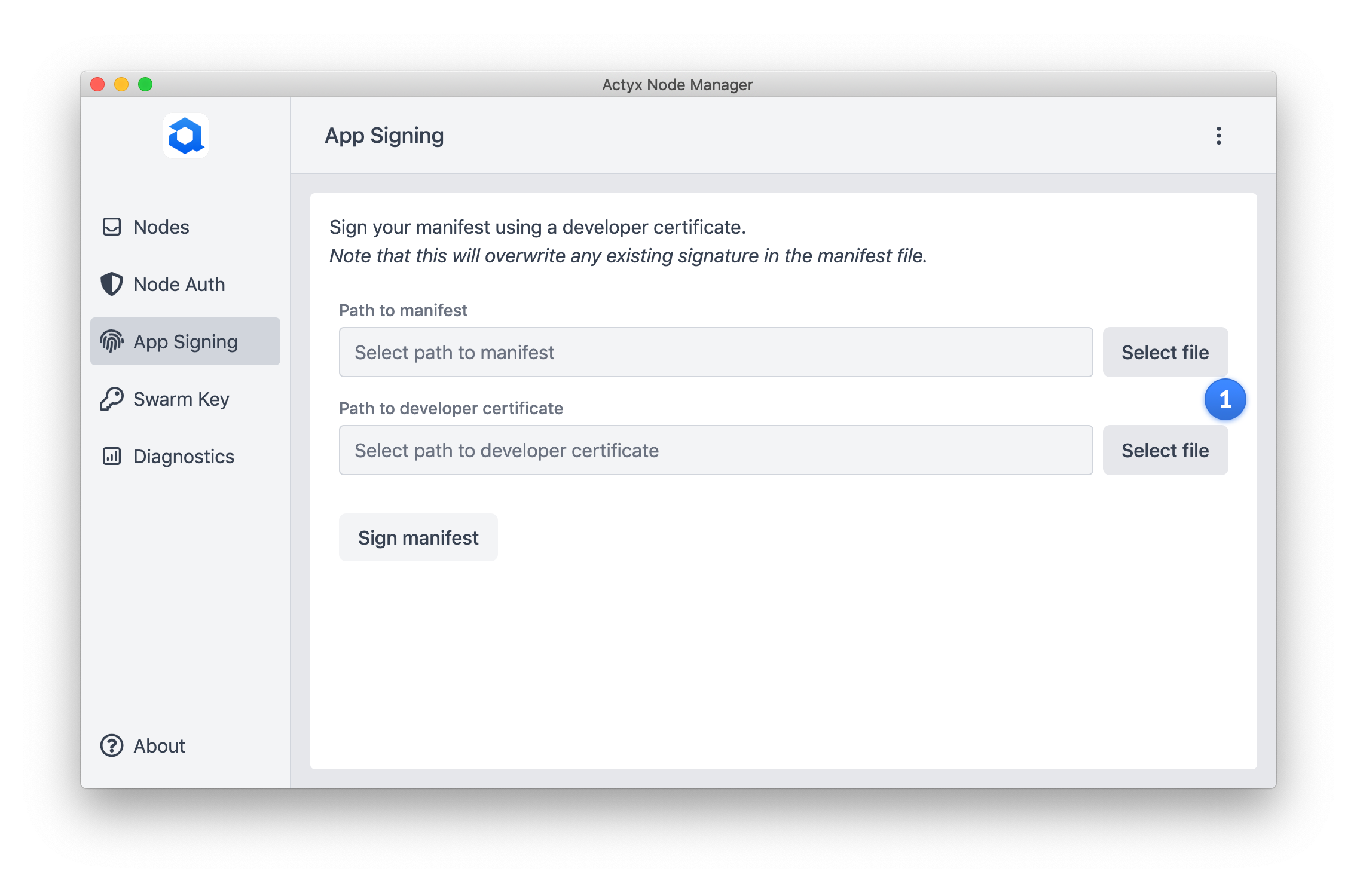 To sign an app manifest, you need to select two files from your disc. The first one is the manifest you want to sign, the second one is your Actyx developer certificate. 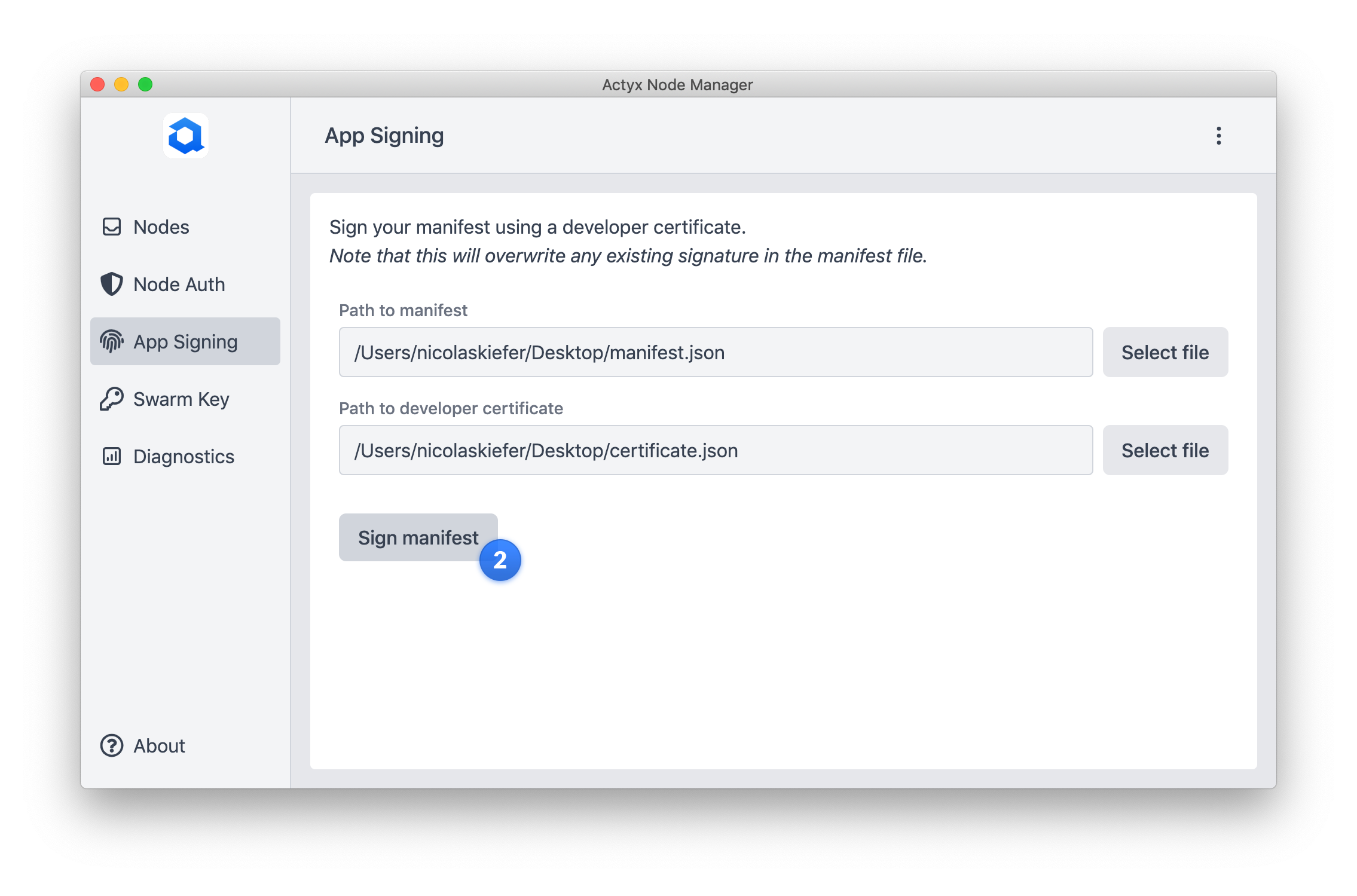 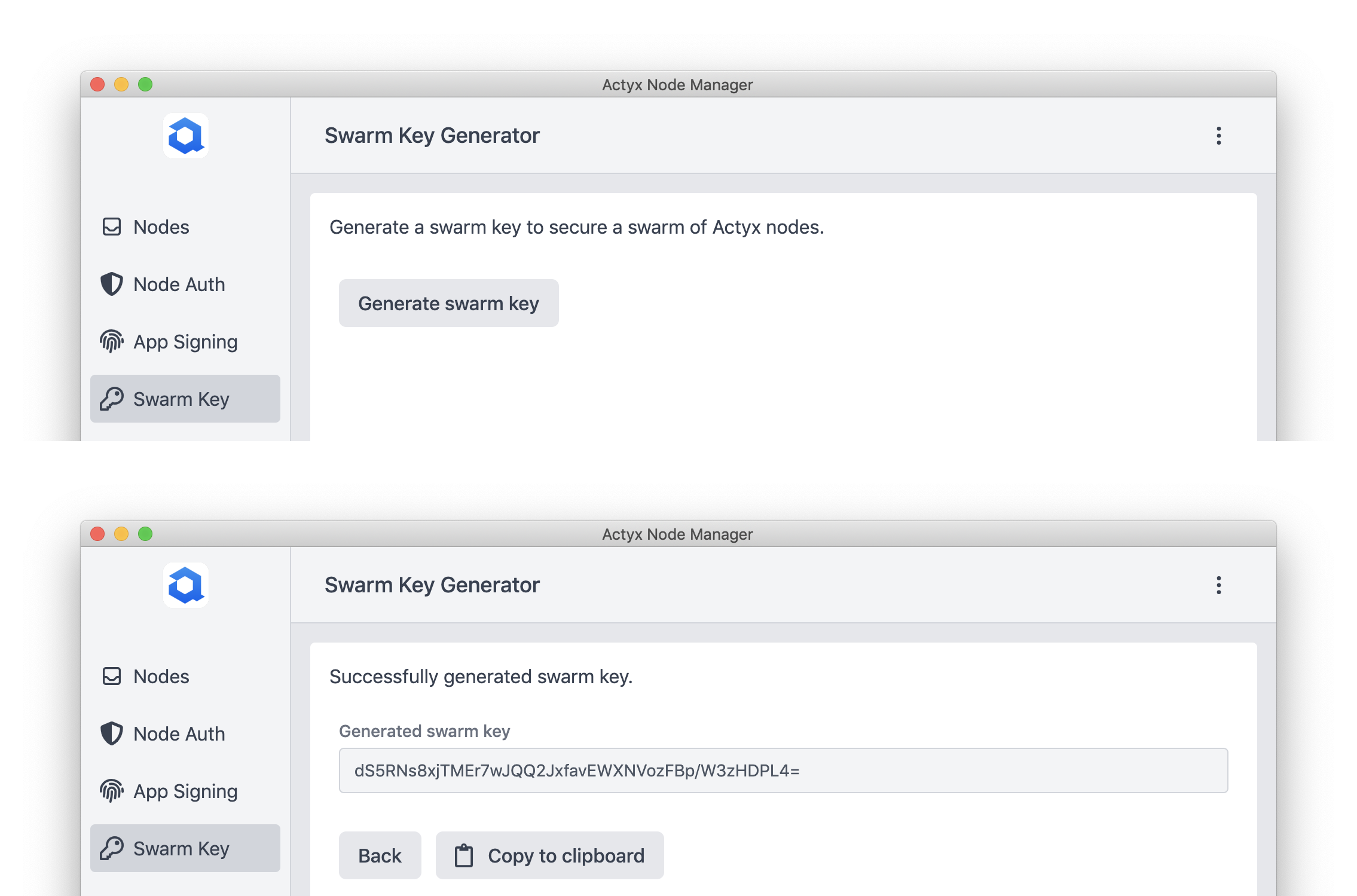 Actyx Node Manager lets you create swarm keys. For more information on what a swarm is and what you need the swarm key for, please refer to our how-to guide.

The Diagnostics view gives insights into the swarm connectivity and provides additional data such as the app state, or the node settings schema. 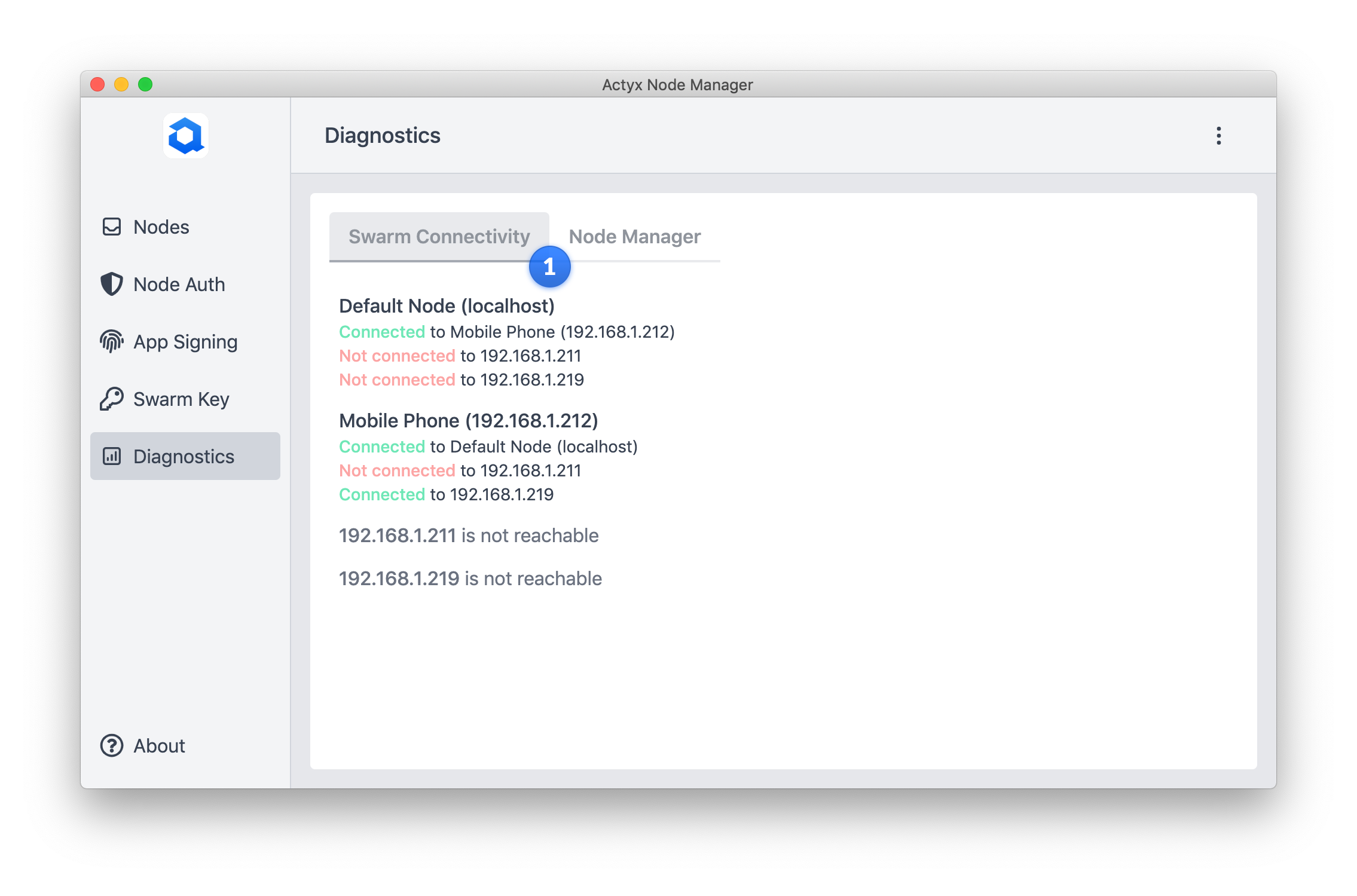 The Offset Matrix tab shows a matrix of all nodes connected to the Node Manager. Each row of the matrix shows how many events a node holds from all other connected nodes. The color of the cells reflects the level of synchronization. A red cell would imply a large number of missing events, whereas a green cell means the node is completely up to date.

Consider three examples of an offset matrix and the interpretation thereof.

In this example, Node 1 has emitted 34 events which all have been synchronized with Node 2. Node 2 has not emitted any events yet. 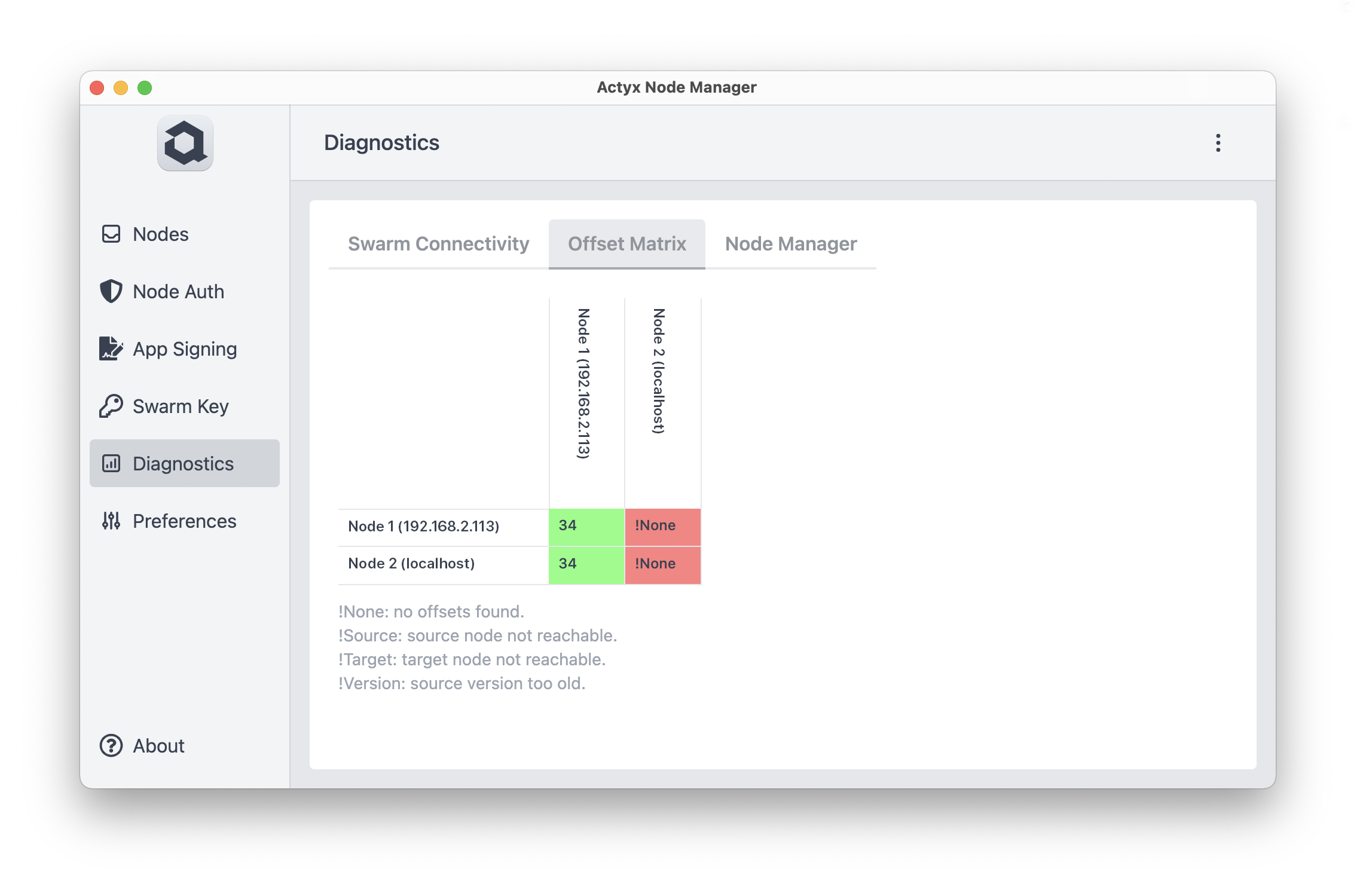 In this example, Node 1 and Node 2 have both emitted events and all events from Node 1 have been fully synchronized. Node 2 has emitted 35 events but Node 1 has only received 14 of them yet and is currently synchronizing. 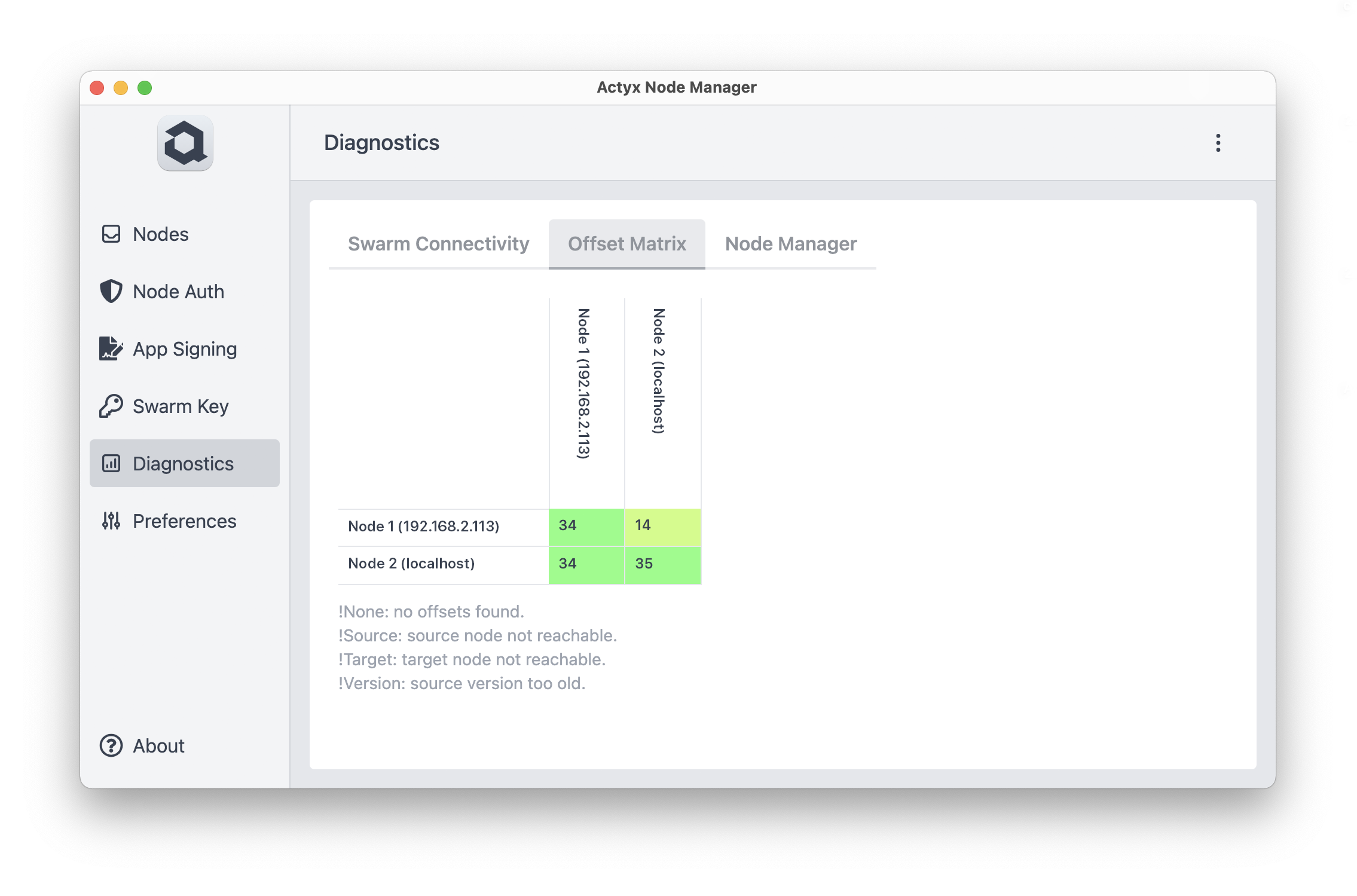 In this example, both nodes are fully synchronized meaning every event from Node 1 has arrived at Node 2 and vice versa. 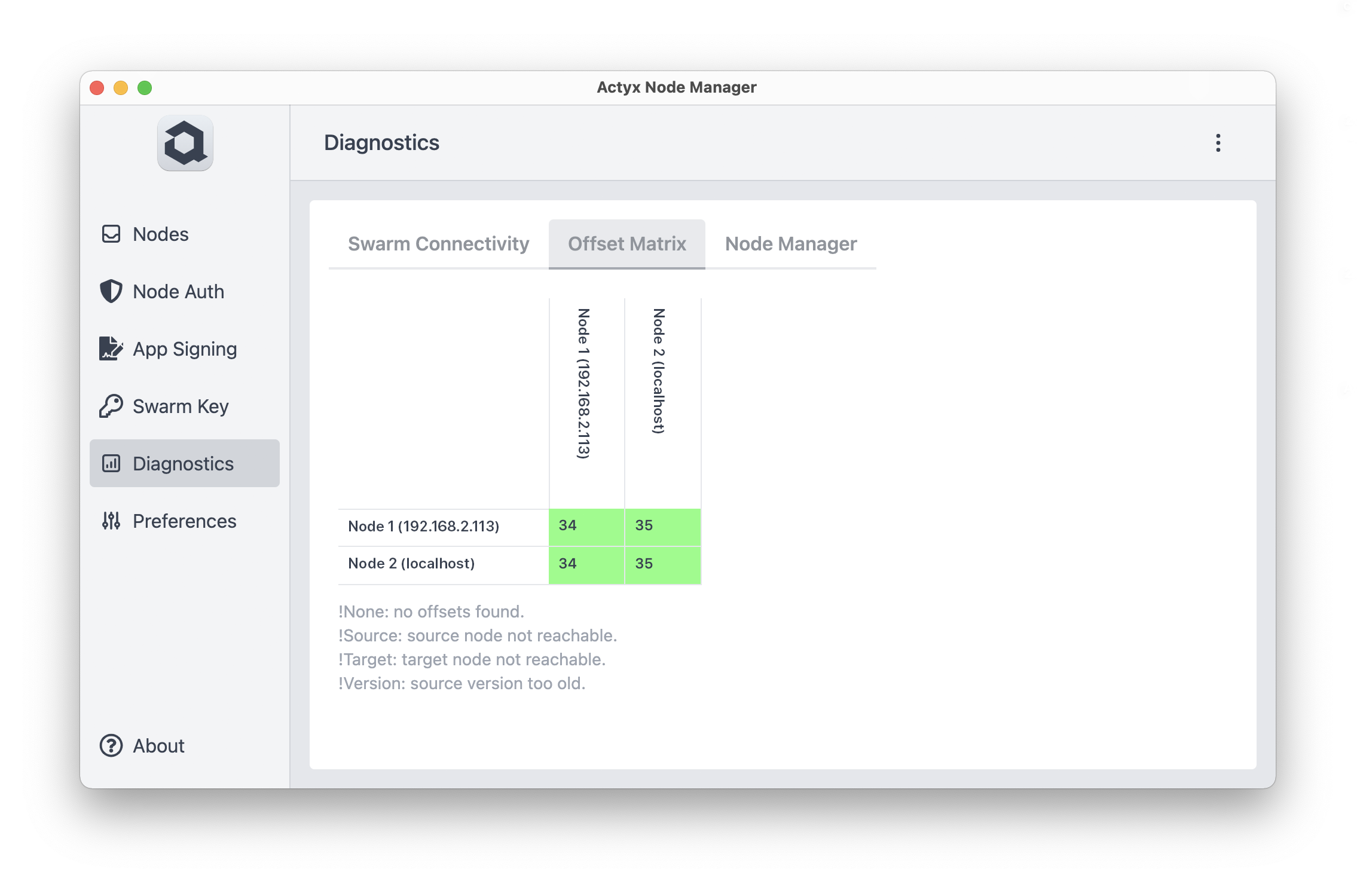 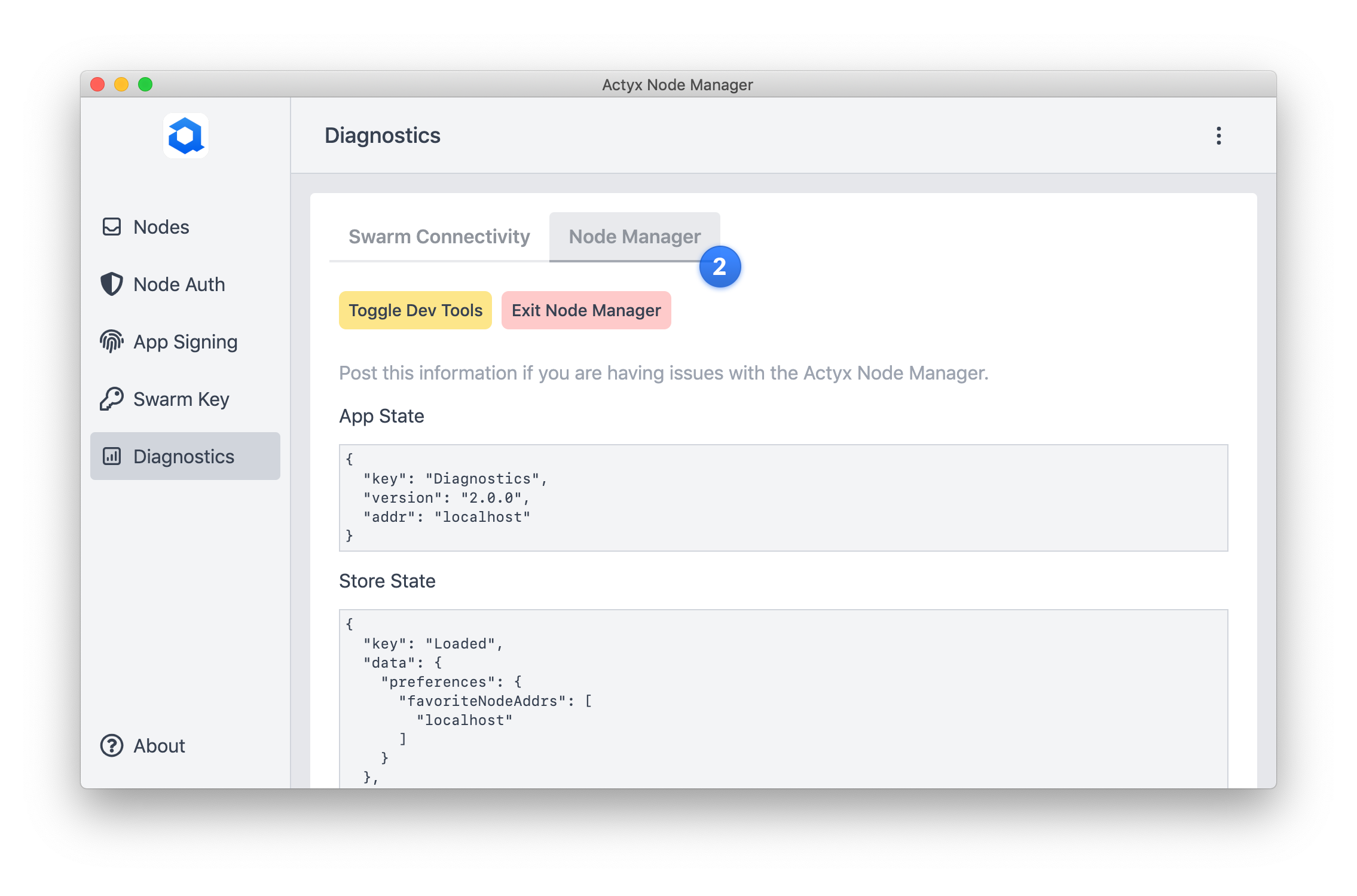 Actyx gathers anonymous aggregate user behavior analytics using Amplitude. Analytics allow us to prioritize fixes and features based on how, where, and when people use the Node Manager. For example, if an error appears frequently for you, analytics will enable us to prioritize accordingly and improve your experience.

For every event, the following information is shared: