In this tutorial, we are going to build a small chat app on top of the Actyx Platform. You might be tempted to skip it because you are not building chats in real-life — give it a chance. The techniques that you will learn in this tutorial are fundamental to building any app on the platform, and mastering them will give you a good understanding of its capabilities.

The tutorial is divided into three sections:

You don’t have to complete all of the sections at once to get value out of this tutorial. Try to get as far as you can — even if it’s just one or two sections.

In order to get the most out of this tutorial, it is helpful if you have basic knowledge of HTML, CSS, and TypeScript. But since this is a fairly simple app you should be able to follow along even if you are coming from a different programming language.

If you haven't worked in TypeScript before, we can recommend this guide to brush up on the basics.

The best way to experience this tutorial is using multiple devices. In addition to your PC, you will need a second device running Android.

If you have disabled mDNS in your network, you will have to ensure your devices can initially connect to the internet. If you have enabled Client Isolation, this tutorial will not work.

Setup for the tutorial#

Now, let's get right to it. In this section we will turn your devices into ActyxOS nodes, configure the nodes, and set up the basic directory structure for the app we will build.

If you are working on a Mac, you can use ActyxOS on Docker. If you don't have Docker installed on your Mac already, you can install it from here. ActyxOS on Docker is publicly available on Docker Hub. To download and run the latest version please execute the following command from your terminal.

Since Docker does not support peer discovery via mDNS, you need to configure your Docker node with a bootstrap node. To do that, please paste the following command into your terminal.

If you get stuck or want to learn more about ActyxOS on Docker check out this guide.

In order to be able to run, test and build the chat app you are going to need Node.js and npm, which you can install from here.

We are now going to setup a simple web app project using Parcel. Somewhere on your computer create a directory called chat.

In that directory create a file called package.json and add the following content:

Create another file called tsconfig.json with the following content:

Now create a file called index.html and add the following:

Finally, create a file named index.ts with the following content:

To test that everything works, open a terminal, navigate to the chat directory and run npm install and then npm run start. This is what you should see in your terminal. 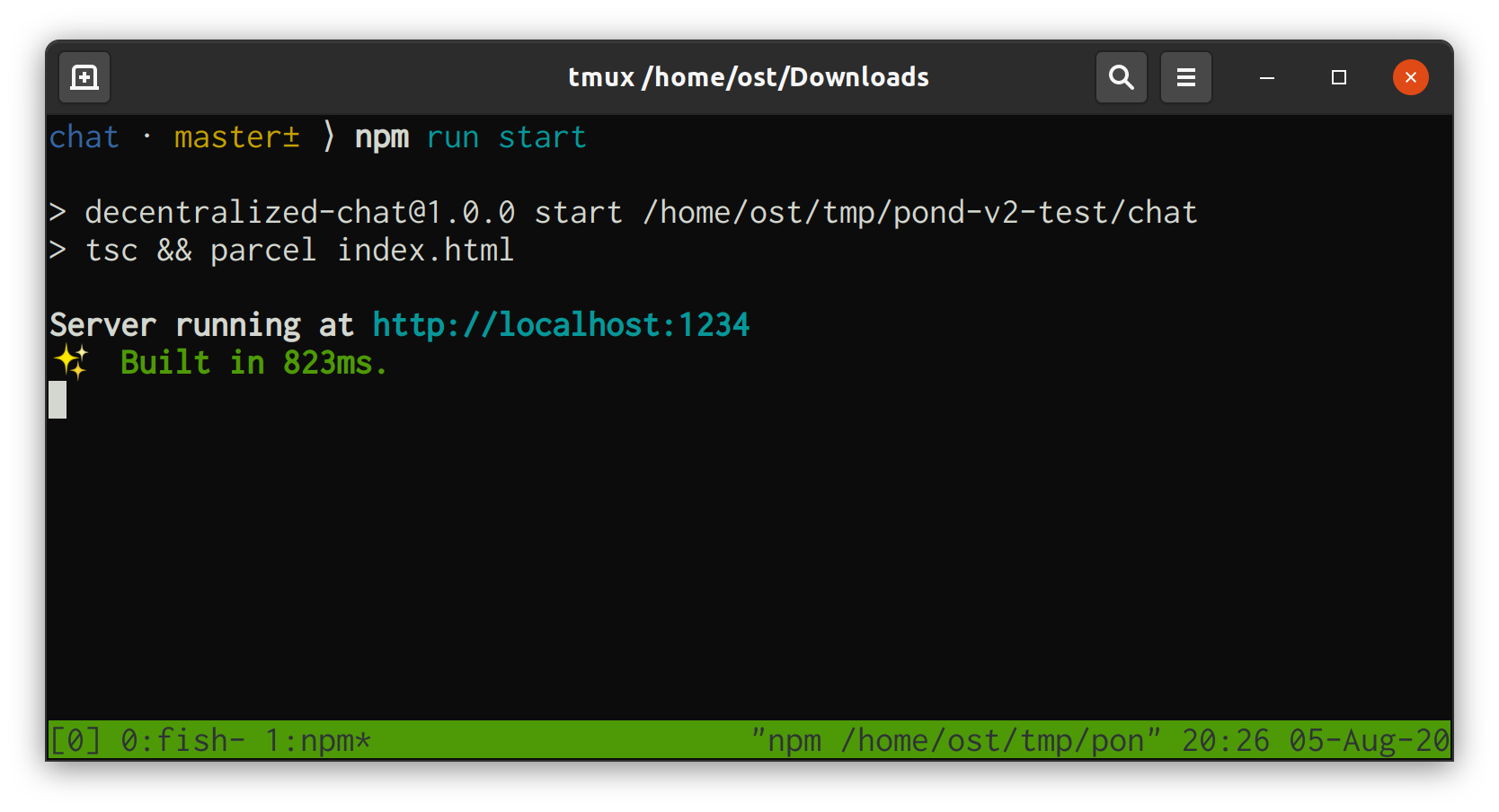 If you now navigate to http://localhost:1234 in your browser and open the Developer Tools you should see this:

If you get stuck, get help in the Actyx Developer Chat or e-mail us at [email protected].

Now that you’re set up, let’s get an overview of the Actyx platform!

ActyxOS is a multi-node operating system that allows you to build local-first applications running in a swarm of nodes (devices). Specifically you can:

ActyxOS enables a completely decentral architecture that allows you to build apps that always run. Your apps always run because they run locally (on the edge) and only interact with localhost APIs. Currently ActyxOS offers two APIs:

Actyx Pond is an application framework for building apps that run on ActyxOS. It is currently available for the TypeScript programming language. Support for further languages, including C#/.NET is planned. Here is how to works:

What is interesting about Actyx Pond is that it allows you to forget completely about how to synchronize state between nodes in the swarm. This happens, for example, when one of the nodes goes offline for a while. As soon as it comes back up, Actyx Pond automatically reconciles what happened between all the nodes while they were disconnected from each other.

Let's now have a look at how to use ActyxOS and Actyx Pond to build our decentralized chat app.

To implement and run our chat app we need to do three things:

Our chat has a very simple logic. Any participant can send messages and receives messages sent by all other participants. When a participant joins the chat, he should also receive all past messages that were sent when he wasn't part of the chat.

The way to implement this using Actyx Pond is to write a so-called fish. A fish is a state-machine. It has a state which it updates when it receives information from other fishes.

Let's start by defining types for the chat fish's state and the events it can receive. Events it receives from other chat fishes are strings (chat messages). The state of the fish will then be an array of strings. In the index.ts file, add the following two lines of code:

When a fish first starts up, it won't have received any chat messages yet. So let's define the initial state as an empty array:

Now comes the actual logic of our chat, namely how to calculate the chat state (which we will show to the user), from the events we have received. We do this by writing a so-called onEvent function. In this case, we will simply add the chat messages (ChatEvent) we have received to our state (ChatState):

This is the complete chat logic. Let's now turn this into a fish.

In Actyx Pond you implement a fish by creating an object with a couple of properties. You must provide the fish with an ID, an initial state, the onEvent function and information about where to get the chat messages from, a so-called event stream tag.

First, add the following imports to the top of the index.ts file:

Now that we have done that, we create the tag for our chat messages and then define the fish itself:

Lastly, we need to build a user interface and hook up our fish. Let's implement a very simple user interface showing the chat messages, an input field to type a message and a button to send the message.

Open up the index.html file and adjust the contents of the head and body sections as follows:

The last thing we have to do is to hook up the user interface to the fish. We want to

In the index.ts file, add the following code:

Pond.default().then(pond => {
// Select UI elements in the DOM
const messagesTextArea = document.getElementById('messages')
const messageInput = <HTMLInputElement>document.getElementById('message')
const sendButton = document.getElementById('send')
function clearInputAndSendToStream() {
// When click on send button get the text written in the input field
const message = messageInput.value
messageInput.value = ''
// Send the message to a stream tagged with our chat tag
pond.emit(chatTag, message)
}
sendButton.addEventListener('click', clearInputAndSendToStream)
// Observe our chat fish. This means that our callback function will
// be called anytime the state of the fish changes
pond.observe(ChatFish, state => {
// Get the `pre` element and add all chat messages to that element
messagesTextArea.innerHTML = state.join('\n')
// Scroll the element to the bottom when it is updated
messagesTextArea.scrollTop = messagesTextArea.scrollHeight
});
}).catch(console.log)

To test that everything works navigate to the chat directory, run npm run start and open http://localhost:1234. You should now see the chat app. If you started ActyxOS on Docker on your local machine, you should now also be able to send messages. However, you still don't have anyone to chat with.

Package and run the app#

In order to run the chat app on your Android device, you need to package and deploy it.

To tell ActyxOS about the app, add an app manifest file called ax-manifest.yml to the chat directory. Add the following contents:

Before packaging the app, run npm run build to create a distribution version of the web app (which will be placed in the dist directory). If everything works you should see something like this:

Now use the ActyxOS Node Manager to package and deploy the app (use the path to the chat directory):

If you open ActyxOS on the Android device, you should now see the chat app. You can click and open the app and should now be able to chat back and forth with your local machine!

Here is what you can try out now:

We hope that you are now starting to experience the power of local-first applications and the Actyx Platform. If you are keen to dive a bit deeper, check out the following further resources.

You can download the complete code for this tutorial from GitHub.

Feel free to join our Actyx Developer Chat on Discord. We would love to hear about what you want to build on the Actyx platform.